My teen idol wore shorts and a headband. No, it was not Richard Simmons but a blond Swedish god. A tennis god, Bjorn Borg. Everything about him appealed to my shy, self-conscious teenage self; his lean physique, his flowing blond locks, those piercing blue eyes, his deadly two-handed backhand and his graceful moves on the court. Because of him I took up tennis and found I was pretty good at it, not like soccer (I hate running, especially into people) or volleyball (not good for pianists as I once sprained a finger when the ball hit my hand at a bad angle and I couldn’t play piano for two weeks).

END_OF_DOCUMENT_TOKEN_TO_BE_REPLACED

Vancouver is awash in freeze-framed explosions of bubble-gum-pink-awesomeness.  Magnolias, cherry and plum blossoms are on practically every block in the city. Their dazzling, blushing petals clear my mind of the gloomy grey days that plague our city over the winter months.  Getting eyefuls of blossoms evoke in me a sweetness tinged with sadness, knowing this eye candy is fleeting and will soon flutter away.

Making a Blossom Berry Smoothie is my way of rejoicing and recapturing the joy of springtime! 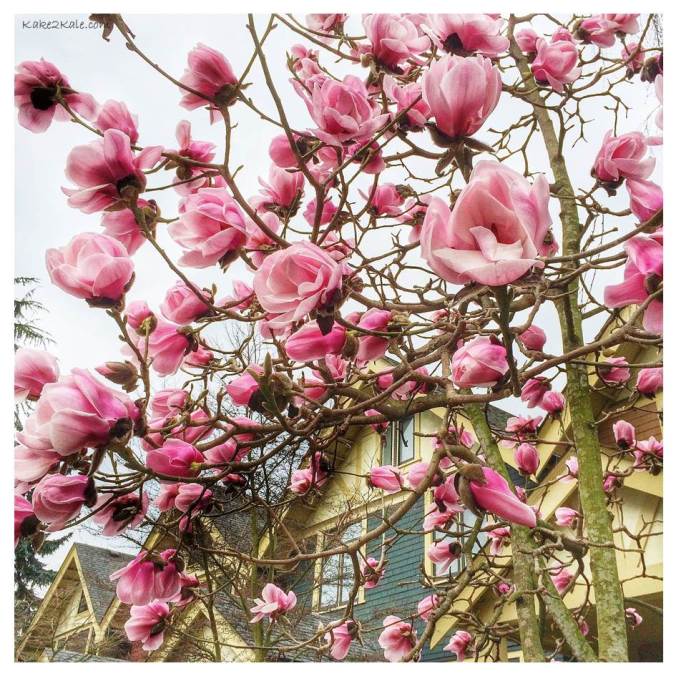 END_OF_DOCUMENT_TOKEN_TO_BE_REPLACED

I was in a Mediterranean café the other day and saw on the shelf a bottle labeled rose water.  I was feeling a little thirsty and decided to try it. After purchasing it, I unscrewed the cap and took a swig…BIG MISTAKE! It was waaaaay too strong, way, way too strong. I tried diluting it with water and still, it was not drinkable. Once home still burping roses, I did some research, and it was confirmed, rose “water” is not for drinking straight out of the bottle. It is to be used sparingly in drinks and desserts. So {Kale} and I made the most delightful and refreshing cocktail with it, which I’ve called the Mimrosa.

My Mom used to have a perfume that smelled of roses and it always made me feel uplifted when I inhaled the scent.  Every living thing has a vibrational energy, and rose essential oil has an extremely high frequency.  A healthy person has a MHz of between 62-6, someone with a cold or flu around 58 MHz, and rose oil has 320 MHz.  So it would be reasonable to say that when I was inhaling Mom’s rose perfume I was elevating my life force.  So here’s to uplifting our spirits with a rose cocktail!!

I have paired my Mimrosa with a white chocolate waffle for a light brunch or an elegant dessert.

Benefits of some of the ingredients include:

Rose – Uplifts your mood.
Strawberries – Vitamins C, good for skin, antioxidants, and anti-inflammatory if eaten 3 times a week.
Organic Butter -Ideally, butter from grass fed cows has high amounts of vitamins A and E as well as vitamin K2 which is imperative if you are taking calcium supplements, as without K2, the calcium will go into the arteries, causing atherosclerosis.  K2 is not easy to come by, the vitamin K in leafy greens are K1, which helps with blood clotting.  It also has CLA which has been studied to help with reducing body fat and increasing lean muscle mass, it may also benefit heart health.  Grass fed butter also contains butyrate, which is an anti-inflammatory fatty acid.  Organic butter will have lower chemical toxins, since toxins are fat soluble they get stored in fat,  but grass fed will have higher nutrients.  Check out Time magazine`s latest cover story – Eat Butter – in their June 23, 2014 issue.
Spelt flour – Compared to wheat, it has more nutrients such as protein and minerals.  Though spelt does have gluten, some people who cannot tolerate gluten can still eat spelt without negative reactions.  Unless you have celiac disease then you cannot have spelt. Spelt is an ancient grain that has not been engineered for high yield as wheat has, so that may also have something to do with the increase intolerance of wheat in the western world.
Honey – Contains flavonoids and antioxidants, is anti-bacterial (I put it on cuts instead of polysporin), can help soothe ulcers, coughs.

Directions:
Combine the above ingredients in a pitcher and serve in tall glasses. The the Tonic water ice cubes should be made at least 4 hours ahead, and you can add a raspberry in them like I did, or a mint leaf.