A Portrait Of The Alto Duoro

END_OF_DOCUMENT_TOKEN_TO_BE_REPLACED

In Praise Of The Wild Atlantic Coast

END_OF_DOCUMENT_TOKEN_TO_BE_REPLACED

The Allure Of Alentejo From Cork To Cellars

END_OF_DOCUMENT_TOKEN_TO_BE_REPLACED

In Praise of Salta & Jujuy.

There’s something about Northwest Argentina that is hard to define. Vast. Mesmerizing. Remote. Diverse. Unforgettable. These, to me, are the best ways to describe the region, particularly around Salta and Jujuy.  I love Argentina and think it’s one of the more unique countries to visit. It is not overrun with tourist but offers good travel value, and experiences are still authentic. People’s first impressions about Argentina are about tango and beef.  They would miss out if that’s all they wanted to experience. While the country is receiving more international travellers, most of them are unaware of the special spots around Salta and Jujuy.   Having already travelled to Argentina’s other popular areas, like Buenos Aires, Mendoza, Patagonia, and Iguazu Falls, I feel the Northwest’s countryside is far more interesting because it’s undiscovered. There’s nothing I like more than being off the grid in a destination.

Why is this area appealing? The top experiences are all in the higher altitude backcountry of the Andes.  These are places where time stands still and landscapes have infinite horizons.  The scenery is a feast for the eyes.  You cannot miss seeing the eerie rock formations, massive valleys and gorges, mountainsides covered with giant cacti, multicoloured slopes illuminated by the sun, salt flats that stretch forever, wild vicunas or llamas grazing,  rustic adobe villages and preserved Inca ruins.  Each place we visited contrasted with the next. We drove along winding dusty dirt roads and through dried river beds for hours with few cars in sight. Some of the mountain switchbacks were a bit nerve-racking when steep, single lane tracks were at the mercy of soil erosion.

Beyond the arid and deserted mountains, but closer to Salta, we discovered fertile valleys with beautiful bodegas, vineyards, tobacco plantations, and colonial estancias or haciendas where gauchos ride Paso horses.  The setting is simply stunning.

Although a good problem to have, it felt like the scenery was overwhelming and too much to absorb in 10 days. To really appreciate the distances and stops to soak in the local culture, I recommend 15 days if you like having the freedom to explore by car.  Aside from the visual stimulation, some of our nicer moments were because of the warm hospitality from the locals.  And, the regional food and wine really surprised us! Over several upcoming blog posts, I will share some of our more memorable moments.  One of them was our obsession with empanadas – we had them daily. 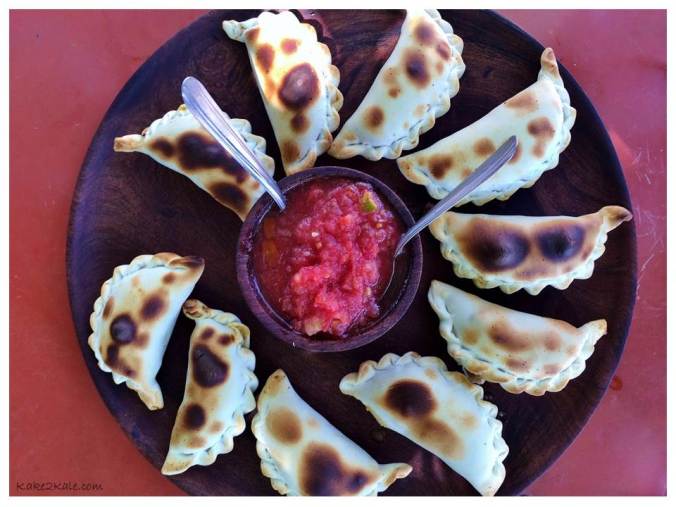 Empanadas are stuffed pastries that have a Spanish origin and are a traditional dish in many Latin American countries. The name is based on the Spanish word “empanar” and roughly means to coat or wrap with bread.  Empanadas differ slightly from country to country. In Argentina, the empanada is typically made with flour-based dough, not corn.  There are also variations in different provinces. In the Salta region, these pastries are called empanadas saltenas and are baked, not fried.  They are commonly filled with ground or cubed beef, chicken, goat, llamas, or ham.  Other ingredients include cheese, onion, boiled eggs, cumin, paprika, olives, peppers, potato, and peas. OK, some of these are superfoods so I was satisfied.

I have always liked empanadas.  Perhaps it’s because I like anything that is wrapped – perogies, gyozas, dumplings, wontons, samosas, etc.  There are other wrapped food in Argentina, namely tamales and humitas; but, I’ll save that for another post.  Knowing that I was going to be in a country of empanadas, I vowed to have them every day.  And so I did, at least once a day for 15 days! 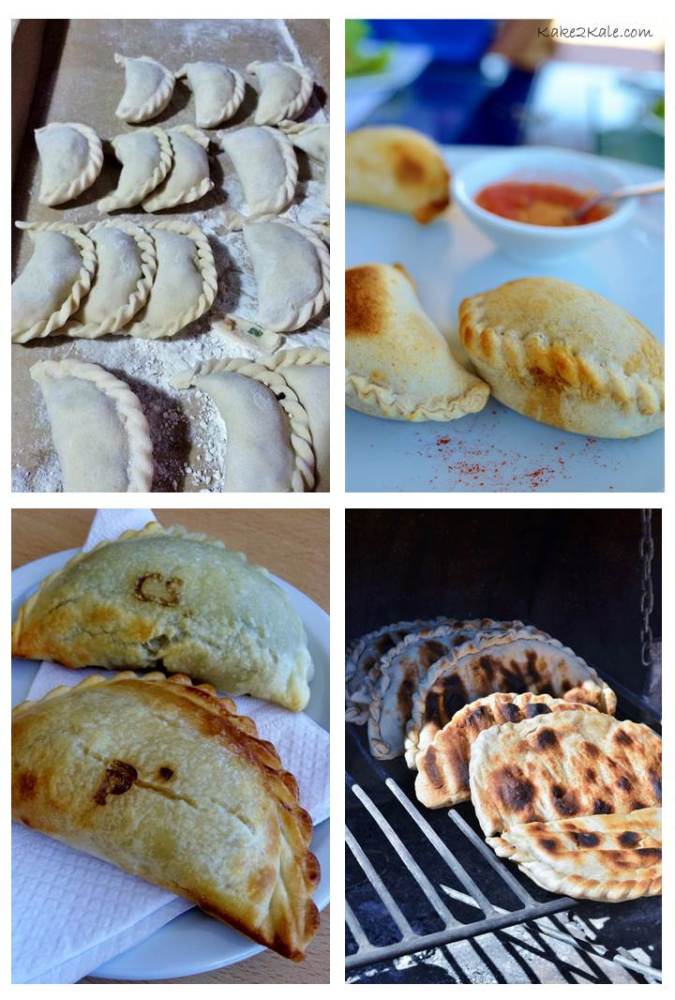 Driven by curiosity, every empanada I had was different with a range of fillings.  My favourite had ground beef fused with blue cheese. There were empanadas of varying sizes but I liked the smaller ones the best – easier to eat more! Some empanadas were accompanied by sauces of which the spicy red pepper was the most popular. More or less, all the empanadas looked pretty similar, but interestingly, some were decorated with a branding iron. 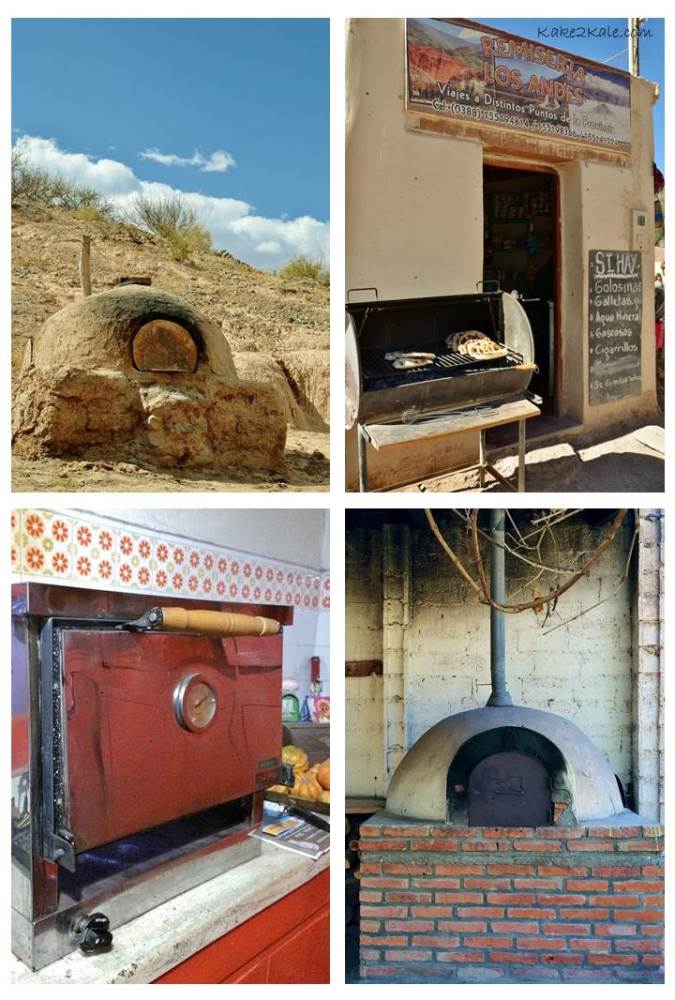 I was told the key to perfect empanadas is in the baking.  The oven had to be super hot!  No matter where we were on the trip – small settlement or large town, modest or fancy house – we always saw a mud or clay oven (wood burning) outside the homes.  Sometimes, I saw empanadas on BBQ grills.  Then, I discovered that there are special stainless steel ovens built for emapanadas, which can bake them at 450C!  The penny dropped – Argentinians are very serious about their  empanadas.

I wanted to learn how to make empanadas and signed up for a cooking course, but to my disappointment, it fell through.  Instead, I was given a local recipe passed down from generations, which I have yet to try.  I hope I can live up to the standards of this recipe. When I make them, I will blog it!

Reflections of a summer gone by with sunshiny staycations and water adventures. Was a good one! Thank you Summer 2021 🥰 #westcoastisthebestcoast ⠀⠀⠀⠀⠀⠀⠀⠀⠀
First time on Tugboat Island, next to #gabriolaisland👌⠀⠀⠀⠀⠀⠀⠀⠀⠀
My happy place 🥰 #atthehelm
Somewhere in the Trincomali Channel ⛵️#joyofsailing #sharethecoast
These are not your ordinary store bought pears! Fun tidbit: On Portland Island (part of the Gulf Islands National Park Reserve), there are heritage fruit trees that date back to the 1800s, originally planted by Hawaiian settlers. At the Palau orchard on the island, we found a variety of apples but the pears were the best! And yes, fruit picking is allowed in the park based on a limit. 🍐#happyfind #wildpears
An end of summer sailing trip began with a cozy anchorage at Princess Bay, Portland Island! #gulfislands ⠀⠀⠀⠀⠀⠀⠀⠀⠀