What does quinoa, salt and llamas have in common?

After Cachi, it was time to move off Ruta 40 and make our way further north in Argentina, towards the border of Chile and Bolivia .   The anticipation of a new destination was trumped by the joy of driving on paved roads.  Our car hummed along the highway towards Salta and we were finally moving faster than 40 km/hour. Woo hoo!  The scenery continued to impress us as we crossed the massive Los Cardones National Park (home of giant cacti) and peaked at the Piedra del Molino Pass (3347 m, pictured below), offering incredible views of the mountains, canyons and valleys below.  As we descended steeply into the Quebrada de Escoipe and Cuesta del Obispo, the lovely paved road turned to a narrow dusty track that clung to the cliff side.  In several spots, the road’s edge collapsed from erosion.  We descended 2200 m in a 2-hour white-knuckle kinda drive, but we managed to find comfort in the dramatic landscape and in knowing that we we left early to miss all the tour buses crawling up the same road.

Another staple ingredient in Argentinian cooking is quinoa.  It’s a grain-like seed that has its origins in the Andean regions between Chile, Bolivia, Ecuador, Peru and Argentina.   The Incas referred to it as the ‘mother grain’, while the Spanish named it Quinoa, derived from the Quechua word for kinwa.  It is a powerhouse superfood!  Incredibly nutritious, quinoa contains all 9 essential amino acids making it a complete protein, which is perfect for vegetarians. It is high in fiber (higher than most grains), antioxidants, and minerals, while being gluten free and low on the glycemic index. It also contains Kaempferol and Quercetin, which may have anti-inflammatory, anti-viral, anti-cancer and anti-depressant effects, according to various studies.

I started eating quinoa back in the early nineties, when it was lesser-known.  These days, quinoa is often in the spotlight.  In fact, the Food and Agriculture Organization of the United Nations declared 2013 as the ‘international year of quinoa’! At home, I mainly prepare quinoa as a salad with sauteed veggies; but on occasion, I have added it to make a flourless chocolate cake. While in northern Argentina, it was interesting to see how the locals prepared this superfood.   My two more memorable dishes was a baked quinoa pie (pictured above), and a quinoa tower salad (pictured below). Both delicious and appealing!

Our destination was Tilcara (2465m), a small village about 175 km north of Salta in the Jujuy province.  Located in the Quebrada de Humahuaca Gorge (Unesco World Heritage Site), Tilcara is quaint and rustic – perfect as a base for exploring yet another fascinating part of northwestern Argentina. 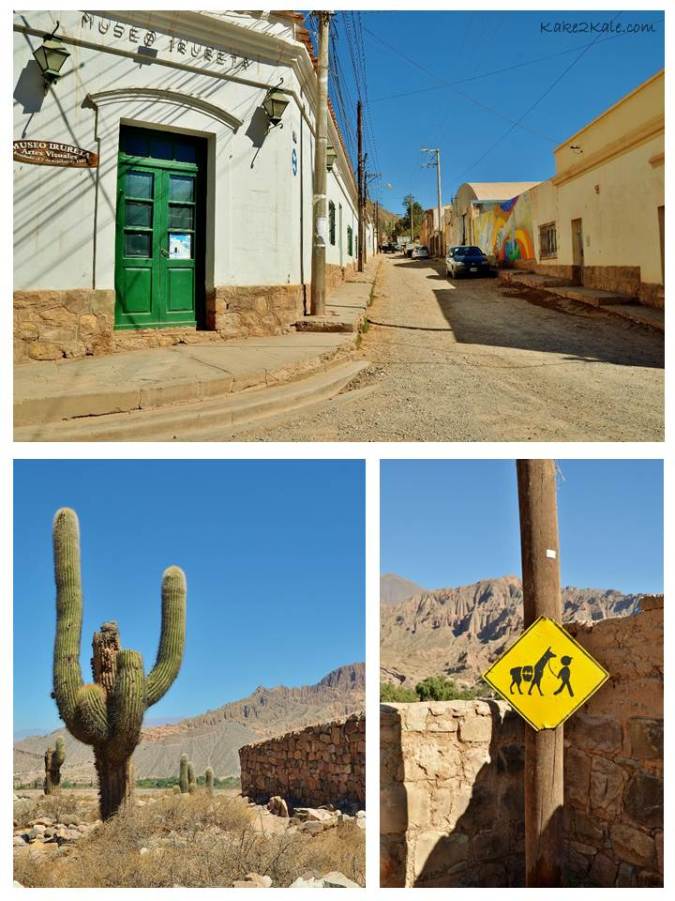 There are three must-do highlights in Tilcara! The first is La Garganta de Diablo (Devil’s Throat) hike which starts from the village. The 7 km trail takes hikers up along a striking red-rock gorge (pictured below), surrounded by panoramic views.  At the end, there is a steep trail down to the bottom, followed by a stroll along a river to view hidden waterfalls.  Then, the next top experience is the archaeological site of Purcara de Tilcara. Declared a National Monument,  it is a well preserved pre-Inca fortification located on a hillside overlooking the village.  After hiking around the Diablo and the ruins, we were famished.  This leads to the third highlight, which was dining at the El Neuvo Progresso restaurant. We felt it was the best choice in town and certainly had the best llama dishes.  Llamas (pictured below) are camel-like animals found in the Andes Mountains and used for their wool, meat, skin and transporting goods.  I seldom find llama meat at home, and while it’s not a superfood, I wanted to try it.  It was served to me in three styles – carpaccio, grilled and stewed, and all were really tasty.  The meat is fairly lean and the flavour is comparable to bison. 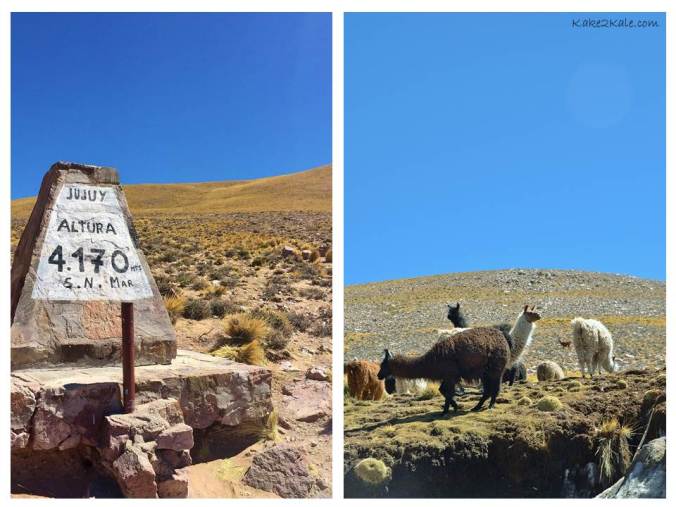 Beyond Tilcara, we ventured higher into the Andes to seek out one of the largest salt desserts in South America – Salinas Grandes – covering about 8000 square kms and located at 3400 m above sea level.  To give you a comparison, this salt flat is about the same height as the Mount Etna volcano in Sicily and nearly as high as Mount Fuji in Japan.  The drive to and from the salt dessert was another big road adventure.  A short distance from Tilcara is the town of Parmamarca, which is famous for its ‘hill of seven colours’ and artisan market.  From this town, a paved road winds up the side of the valley in a ribbon of switchbacks to a mountain pass at 4170 m.  Beyond the pass is the Salinas Grandes.  All the while, we’re surrounded by huge stretches of wild and barren land.

Salinas Grandes was once a lake. Now dried up, the salt concentrations are being mined for its sodium, potassium, and lithium brime.  Nothing appeared to live or grow on the salt.   The sheer size and scale of the dessert is what makes it captivating.  The patterns and texture of the salt was interesting; but most of all, the brightness of the salt was dazzling.  One could easily kill many hours wandering around, enjoying a picnic, and taking goofy pictures…as we did.

So, what does quinoa, salt and llamas have in common? They simply all co-exist in this wild Andes environment. When we set out to explore this corner of Argentina, we were hoping to find remote and unspoiled places with unique local flavours.  Well, we got what we wanted, and more!